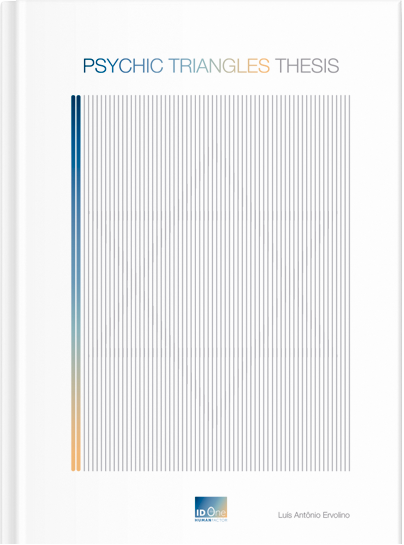 An unusual work, which contains the origin and the foundations of a new science, the science of the Human Potential Factor.

The author, Dr. Luís Antonio Ervolino (in memoriam) was one of the rare and privileged minds that passed through humanity and that, in a silent and discreet way, captured an abstract, subtle and difficult to perceive knowledge, but that permeates and impacts the life of every individual who has lived and will still live through this planet.

From his original profession, psychiatrist and institutional psychoanalyst, he began and deepened his studies, created hypotheses, broke epistemological obstacles with the courage of a pioneer and who, in order to do so, launched himself into a deep scientific investigation in a selfless way and with the clarity that the fruits of his discovery could impact humanity in a truly transformative way.

From the point of view of research and work structuring, it is important to consider that there was, as a starting point, a multidisciplinary integration of areas of human knowledge such as psychiatry, psychoanalysis, philosophy, mathematics, among others – and due to the fact that the discovery does not fit only in one of the respective fields of science already studied, it was necessary to move towards the frontier of knowledge, of epistemology.

Aware of the potential impact that this study could unleash, there was a singular care in the scientific structuring of the discovery and elaboration of the Abstract Formal Object and which, in the future, proved to be the fundamental pillar of the development of a new science delimited in its structures, however, not yet fully delimited in the multiple forms of expression in the specific fields proposed, that is, exclusively in the Professional and Educational fields.

It was at the 1987 Thanatology Congress, in Rio de Janeiro – Brazil, that Dr. Luís and I met, we shared our research and previous work and found the complementarity that both were looking for in their respective scientific investigations. The conjunction of our research took place within the framework of the combination of scientific theory and applied science. This investigation was extensively explored, through the dissection of each element addressed and published here. The first practical application of this joint work took place in January 1988 in the structuring of the pioneering AIDS Counselling and Prevention Program of the Ministry of Health of Brazil, in which it was applied broadly throughout the country and with positive results, which led to Program for international recognition through the World Health Organization, and consequently, to be applied in the African continent.

In the scope of the private professional field in Brazil, during the 90s, we applied in the program “Human Factor as a Competitive Differential”, offered by graduate schools of Marketing, the Human Organizational Synthesis, from the Human Potential Factor Science. Through this application, it was possible to reap excellent scientific and practical results, enabling the students, by expanding self-awareness, to apply their improvements in their market fields, consequently raising competitiveness above the initial expectation.

The main reason for the first publication of the Science of the Human Potential Factor in its basis to be done more than three decades after the mapping and description of the Psychic Triangles and the identification of its Abstract Formal Object is that we chose to safeguard this knowledge until we have developed its orderly, controlled and monitored application with methodological safety, to ensure the results achieved by the application of the new science were proven and preserved, not only technically, but mainly in an ethical way and focused on human evolution.

Thus, in 2020, I fulfilled the commitment assumed jointly with Dr. Luís Antonio Ervolino to only publish the origin, essence and instrument of this scientific work, when the results of the technical application of its principles through the ID One Human Factor Methodology would guarantee its correct use, as well as the condition of establishing a careful expansion. The aspect of a restrictive factor in the application is due to the care from understanding that this methodology developed by us is constituted since its conception, with the technical indications and contraindications, which requires precise professional preparation in the use of this Human Organizational Synthesis for application in third parties, because it is critical the care and necessary criteria required when dealing with human emotions.

In addition to the codification of the Abstract Formal Object, developed based on the application of the Set Theory, we have made available in this work five articles, two at the beginning and three at the end, which make the understanding and applicability of the knowledge of the Psychic Triangles tangible in topics studied and not yet completely understood.

The final goal of this publication is to transfer a legacy of studies and discoveries so that other scientists, from their own studies and research, can continue the development of the Human Potential Factor and advance in areas of the human mental world, as for example, psychiatry, psychoanalysis, psychology, among others; and, in this way, contribute to humanity in the pursuit of universal well-being.